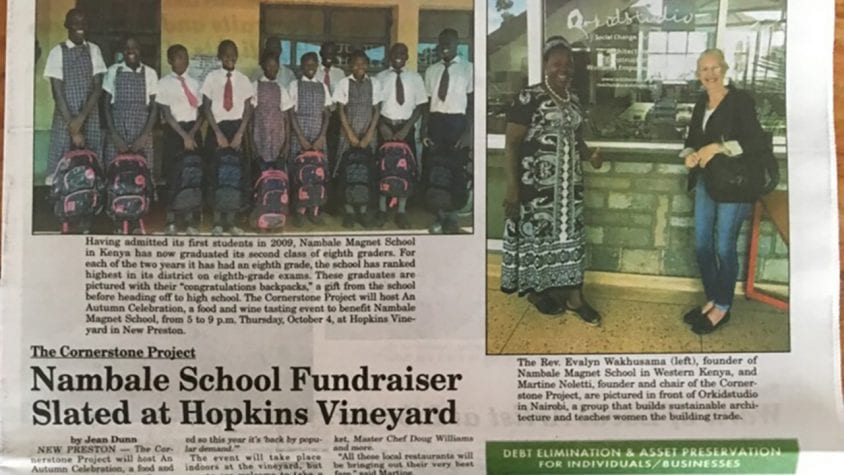 NEW PRESTON — The Cornerstone Project will host An Autumn Celebration, a food and wine tasting set for 5 to 9 p.m. Thursday, October 4, at Hopkins Vineyard, 25 Hopkins Rd.This is the second year for the seasonal gathering to raise awareness and funds for the Nambale Magnet School, a Cornerstone Project-supported residential school located in Nambale, Kenya.

"Last year's event was remarkable," said Cornerstone founder and chair Martine Nolletti. "It was magical, with such great synergy. It was very well attended so this year it's 'back by popular demand.'"

The event will take place indoors at the vineyard, but guests are welcome to take a stroll around the grounds and enjoy the spectacular setting overlooking Lake Waramaug.

"This is a great time of year to be up there," said Cornerstone Project President Barbara Bourgeois, adding thanks to Hopkins Vineyard for donating the venue.

“All these local restaurants will be bringing out their very best fare,” said Martine.

Musical entertainment will be originals and covers in the pop and rock genres performed by The Settlers, a band that aims to “push the boundaries of music while maintaining a familiar and classic accessibility.”

The event will include a silent auction and raffle giveaway.

“We have some very exciting silent auction prizes, more so even than last year,” said Martine. “We have concert tickets from a major artist, lots of artists have contributed artwork — a host of things from the practical to the sublime.”

All proceeds of An Autumn Celebration will benefit the Nambale Magnet School.

Nambale Magnet School was founded by the Rev. Evalyn Wakhusama, the second woman ordained to the priesthood in the Anglican Church of Kenya. While attending Yale Divinity School in New Haven, she became friends with a number of Connecticut residents, some of whom would go on to form the Cornerstone Project.

A native of Nambale, currently living in Nairobi, Rev. Wakhusama had a desire to reach out to her western Kenya community in a way that would not only address immediate needs, but would also instill hope for the future.

"With the AIDS pandemic, that area went from being a poor region to one of abject poverty," said Martine. "There were more homeless children than the community could assimilate. We came up with an idea for an initiative that would empower women to raise the community up."

"When we asked her what she needed most, she said she wanted the children to be educated," said Barbara.

The Cornerstone Project became the major supporter of the Nambale Magnet School, which broke ground in 2008 and admitted its first class of 30 students in 2009.

"Now, we're up to eighth grade," said Martine. "We have two, eighth-grade classes and we've found scholarship money for all the sponsored students to go to high school."

At NMS, about half the student body pays tuition; the other half is made up of supported students, most of whom have been orphaned by AIDS. Supported students receive food and housing and the same education received by paying students.

Academics at NMS are demonstrably excellent. Based on national exam scores, for the two years that NMS has had an eighth grade, the school has been the top scorer in the entire Busia District of northwest Kenya.

Nine years after that first class was admitted, the school currently enrolls 397 students and employs a staff of 51.

The creation of teacher housing helps the school attract the best teachers. A newly hired tech person develops technology for the school and has also implemented computer courses.

A working farm on school property generates enough food to feed the children and staff, with excess eggs, milk and vegetables sold back to the community.

A sewing center employs area women to sew all the NMS uniforms and also sells uniforms to other schools.

"Our goal is for the school to be financially and ecologically sustainable, and we're doing everything we can to create an economy that supports that," said Martine. "We want to empower the community to take care of itself."

"It's so much more than a school," said Barbara. "What the community is getting from this extends far beyond just academics. It's an evolving story. It gets bigger and bigger the longer we go."

For Barbara, when she thinks of Nambale prior to the school's founding, she sees something akin to a sinkhole — the collapse of a system that causes a gaping hole to open up, swallowing everything in its path.

"That whole area was like a sinkhole," she said. "Now there's a mountain springing up, a beautiful mountain with so much to offer."

The transformation of the community has global implications, the women believe. Towns in Kenya and other African nations have sent delegations to Nambale to study the school, and in particular the farm that sustains it.

The school's founder and benefactors willingly share such information for free, believing that their system can be applicable to many other regions for the betterment of all.

"Terrorism breeds in abject poverty," said Martine. "What we're promoting is a cycle of positivity that's palpable in the town. We're lifting an entire community up. There's a lot more hope there than when we first started."

Tickets for An Autumn Celebration are $25 in advance, available online at cornerstoneproject.org, at The Pantry in Washington Depot and New Morning Market in Woodbury, or $30 at the door.

Those wishing to support the Nambale Magnet School directly may donate at cornerstoneproject.org or at www.gofundme.com/support-nambale-magnet-school.