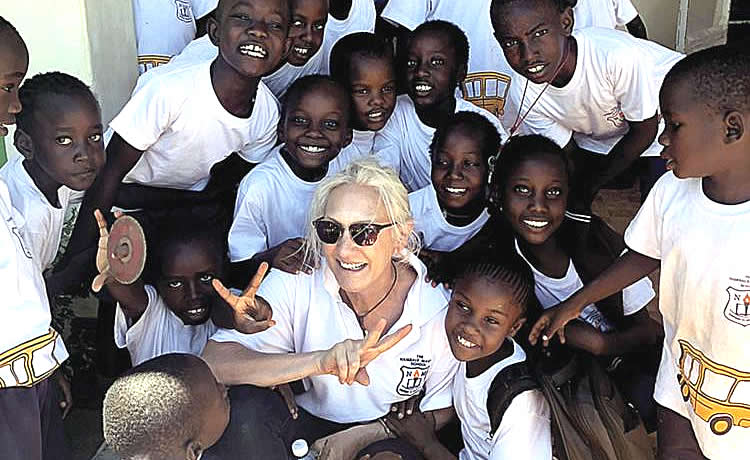 September 25, 2019 - by Veronika Jelenik - The Voices - NEW PRESTON, CT - The Cornerstone Project, a grassroots nonprofit that works to provide education to vulnerable children, will host its third annual Autumn Celebration to benefit the Nambale Magnet School from 5 to 9 p.m. Thursday, October 3, at Hopkins Vineyard, 25 Hopkins Rd.

For $25 in advance or $30 at the door, guests may enjoy food donated by local eateries, wine, music by Devon Eddie and The Settlers, a raffle, a silent auction, photography, fine art and lots of good company.

Tickets are available on the Cornerstone Project's website, at Hopkins Vineyard, at New Morning Market in Woodbury and at The Pantry in Washington.

The Nambale Magnet School, founded by Evalyn Wakhusama, is a residential school in the small, rural town of Nambale in western Kenya's Busia County. It is committed to sustainability and top-notch education for area children, many of whom were orphaned by AIDS.

The school, though on its way to full financial sustainability, is funded mainly by donations, so all proceeds from the event will benefit NMS.

Martine Nolletti of Roxbury established the Cornerstone Project in 2008, a year before NMS opened.

The nonprofit, headquartered in Stonington, is currently dedicated to advancing NMS, though Mrs. Nolletti said the school is a prototype for how the Cornerstone Project can empower similarly marginalized populations through education.

Mrs. Wakhusama, who grew up in Nambale, spoke to her new friends about the havoc AIDS wreaked on her community.

In 2013, U.N. statistics for Kenya estimated 1.1 million children were orphaned after their parents died of the disease. Most of these children are cared for by extended family members who often must nurture up to 20 other children on $1 to $3 a day.

In other cases, children raise children. Some resort to stealing sugarcane off trucks to eat for some sustenance.

Just before Mrs. Wakhusama returned to Kenya in 2002 after earning her master's from Yale, a conversation over chai tea with Mrs. Nolletti and friends evoked a question: "What do you do with a situation that has turned so bad?"

The answer, they decided, was education.

Mrs. Wakhusama founded Women's Initiative for Knowledge and Survival, or WIKS, a Kenyan NGO with an American chapter in Bethany, largely dedicated to supporting the Nambale Magnet School.

With help from Mrs. Nolletti and others, WIKS-USA raised $350,000 to purchase land and begin building the school in 2005. NMS officially opened in 2009, introducing its first "baby" class of 35, three-and-four-year-olds. Another preschool class was added each year until the pioneers graduated from eighth grade in 2016.

This year, NMS celebrates its 10th anniversary. In just a decade, the school has grown to about 435 students.

The Nambale Magnet School has made waves in its southern African region; folks come from Zimbabwe, Uganda, Tanzania and other surrounding countries to witness the school's success, especially in its sustainability projects.

One such project is a sewing center; this year's festival will feature hand-sewn African items by the craftsmen at NMS, who also sew the students' uniforms.

"The stuff they do is just remarkable. We brought home a whole suitcase's worth of stuff to share with the congregation, and it's already all gone," said Pastor Sandy Koenig of Woodbury's North Congregational Church, another of NMS' greatest supporters, who visited the school in June while on sabbatical.

Another is the school's farm, which students help maintain. With a garden, greenhouse, dairy cows, pigs, chickens and rabbits, the farm feeds students and generates income as any surplus is sold back to the community. The animal waste is used as fertilizer for vegetables and a biodigester converts the rest into methane gas for cooking.

There is also a water filtration system that captures rainwater from roofs and funnels it into cisterns to be purified.

The school's greatest success is the quality of its education. In 2012, NMS scored third overall among 50 schools on district exams and its students earned three of the top 10 scores out of more than 2,800 district candidates, according to the school's website.

Just a year later, six of the top 10 scores were earned by NMS students. NMS is currently ranked the number-one school in Busia County.

Mrs. Nolletti spoke of two students, Alpha and Jackson, who were members of the inaugural class.

Alpha and Jackson were among the poorest of NMS' orphaned children, but when they were given the proper nutrition and education, they excelled in ways unprecedented.

Both children were of the top exam scorers in all of Busia County, and upon graduating, received full scholarships to the prestigious Light Academy in Nairobi, where they maintain 4.0 GPAs.

"They outperformed their more privileged counterparts," said Mrs. Nolletti. "So this is breaking a lot of stigma. We theorized that orphans, if given the same kind of premier education, will perform," she said, "and they have done exactly that."

To keep the school sustainable and integrated, there are two to three paying students for every sponsored orphaned student. Sponsored students are selected based on interviews with their caretakers and an in-person evaluation of their circumstances.

These students are given on-site housing, where there is electricity, filtered water, food and care.

It's not just about the students, though. "The school has become a centerpiece of that town," said Pastor Koenig. "Not only does it educate children, but it also employs people."

The school, through such things as the sale of crops, eggs and pigs to area residents and a new beekeeping operation, creates micro-economies. It also provides work for tens of Nambale residents. There are farmers, cooks, kitchen staff, sewers, boarding staff, teachers, counselors and more.

The school also provides computer classes for area adults, and Mrs. Nolletti said they are thinking of building Nambale's first public library on a new piece of land recently purchased with funds from a local donor; other ideas include a sports complex and a day care center.

Both Mr. Koenig and Mrs. Nolletti visited Nambale this summer, with Mrs. Nolletti going in May for a needs assessment and again in July for a 10th anniversary celebration. Students marched through the streets of Nambale in NMS apparel, singing and dancing in typical Kenyan style.

Mrs. Wakhusama similarly visits the U.S. each year, sometimes delivering a sermon at North Church and providing updates on the school.

The Autumn Festival, said Mrs. Nolletti, is a place for fellowship, connection and fun. An interior designer by trade, Mrs. Nolletti chose years ago to dedicate most of her time to the Cornerstone Project and the school.

"Anyone and everyone has the capacity to make a difference somewhere," said Mrs. Nolletti, "and this is just how we've chosen to."